They had a deal, she reminded him.  If he didn’t want to wear a condom all the time, he’d have to help with her birth control, and she was off the pill.  It made her nauseous, and she didn’t see why she had to suffer for their lovemaking; wearing a rubber didn’t make him sick to his stomach all day, she told him.

And so he had agreed, but he’d had no idea what he was getting himself into, he thought in retrospect.  If he had, he might have thought twice about it, he told himself now.  They could predict when they needed to use protection, he’d argued, so the onus could be on him then and they could go naked, literally and figuratively, the rest of the time.

No way, she’d said.  She’d already had two abortions and she didn’t want to have another.  He’d remembered what she had looked like when she walked out of the clinic in Brookline the time that he was the father; far paler than normal, weak, stunned.  They’d walked back to his car through the protestors who were less interested in her because she was coming out than trying to persuade women walking in the opposite direction not to go in. 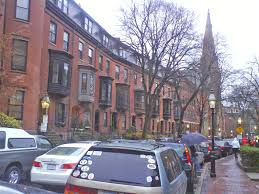 She went home and lay down, and he tried to stay as quiet as he could the rest of the day.  Their other roommates came and went and he tried as best he could to keep them quiet, to damp their enthusiasm without letting them know what had happened, why she needed to withdraw.

Now they had a place of their own, in Boston, on Beacon Street.  It wasn’t on the sunny side and the darkness fed her depression, but they had windows on the ground floor in the back, facing the alley, so some sunlight fell on their bed and the living room on winter days.

He wondered how, exactly, they would do it; she had left her women’s health book open at the page that showed the correct method of filling the little rubber half moon with spermicide, then squeezing the sides together to make a little sort of taco to slip into her.  He didn’t want to practice beforehand, and he hoped she wouldn’t make him.

That Saturday they went out to dinner at the French restaurant with the green walls down on Charles Street.  The tables were close together but it was noisy because voices bounced off the exposed brick walls.

“Did you look at the picture?” she asked.

“Yes,” he said through gritted teeth as he looked at the woman opposite him one table over.  “Do we have to talk about it now?”

“No one will know what we’re talking about if we keep it discreet,” she said, her left eyebrow arching slightly upwards, as if they were conspirators.  “We can pretend we’re communicating in code because we’re surrounded by spies, like this is occupied Berlin or something.  C’mon.”

She smiled a mischievous smile, but he didn’t think it was funny.

“What are you gonna have?” he asked, looking down at the menu, hoping she’d change the subject. 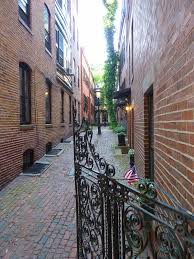 “You never ask me that.  Are you embarrassed?”

“I just don’t think this is the right place and time to be talking about . . . that.”

The woman opposite him was watching them, but looked back at her companion when he glanced at her.

“Perhaps you’re right,” she said, opening up her menu.  “What are you going to have?” she said with a stilted tone, as if observing proprieties solely for his sake.

“I was thinking of the sweetbreads.”

“What exactly are sweetbreads?”

“The pancreas of a sheep.”  He thought of what they would look like on his plate and thought he should probably stick to something less . . . graphic, given what he had to get through later.

The food came and although their conversation wasn’t lively, after two glasses of wine apiece they were as animated as usual when they went out to eat.  At one point she reached across the table and took his hand, catching him off guard, then looking him straight in the eye.

“I appreciate what you’re doing,” she said quietly, although her voice came out husky.  If her intent had been to avoid drawing others’ attention to them, it hadn’t worked.  An older man with half-glasses looked over the top of his lenses at them, then quickly averted his gaze when he was caught in the act.

“Yes it is, I know it is.”  She squeezed his hand and he reciprocated, but his attempt at a smile came off poorly, more like a look of resignation.

He paid and, as they walked out of the restaurant, she slipped her arm in his for the short walk back to their apartment.

As they stood on their front steps and he fumbled with his key, she nuzzled uncharacteristically into his ear.  He turned and they kissed, her mouth warm against his, then they entered the vestibule.

When he came out of the bathroom buttoning his pajamas she was sitting on the bed with the covers pulled back.  She had the little rubber half-sphere and the tube laid out on the bottom sheet, as if she were his den mother and had readied the materials for a Cub Scout project.

“Okay, you get the concept, right?” she asked.

“You hold the diaphragm in one hand, and squeeze this into it.”

She picked the stuff up and handed it to him.  He looked at her, then pressed the middle of the tube and a little cylinder of spermicide came out.  He let it drop into the concave surface.  “Now what?”

“Put the tube down and spread it around.”  He did as she said.  “Spread some around the rim to make it easier to go in.”

He concentrated on the task but self-consciously took in the tableau that he was a part of: she had the lamp on her nightstand turned on and the bulb was too bright since she used it for reading; there were curtains on the windows and they were elevated above the parking lot in back, but he felt exposed.  He imagined someone in an apartment across the alley could see in the windows, and he wondered why she didn’t want to do it in the dark.

She looked down as he held the diaphragm up for inspection.  “Should be.  Okay, next is the tricky part,” she said.

“Because you have to bend it in half but it’s slippery because it has that gel on it, so you have to be careful.  Use both hands.”

He folded the rim along its diameter, then held it in place with both thumbs and forefingers.  “Ready?” she asked.

She spread her legs further apart in a clinical manner, and he slipped the half-moon shape of the thing into her.

She felt within herself, made an adjustment, then gave him a satisfied smile.  “Pretty good for the first time.”  She lay back and pulled the covers over her and said “Turn out the light.”

He walked around to the other side of the bed and pulled the lamp chain, and the room was dark.  Light shone in from above the café curtains, white with purple edges, and he got in bed next to her.

She moved towards him and placed her arm across his chest, but he didn’t respond at first.  “This may take awhile,” he said after a moment.

“I mean, the process sort of killed my interest.”

She said nothing at first.  “That’s okay, it’s good for six hours.”

They lay that way for awhile, then fell asleep.

One thought on “The Diaphragm”