HYANNIS PORT, Mass.  The Rules Subcommittee of the National Touch Football League emerged from its summer session yesterday with a proposal to cap the number of practice hikes teams may take before a snap, and to add one “Mississippi” count to the time that must expire before defensive linemen are allowed to rush the passer.

“You didn’t tag me below the waist, stunod!”

“Our fans expect a fast-moving, high-scoring game,” said Butch Cannizano, president of the Boonville, Missouri, Pirates, a team made up of 8 to 12-year-olds.  “Sometimes you get a spelling bee champ on a team, they put him at center because he’s slow, then they get all nervous about the snap.” 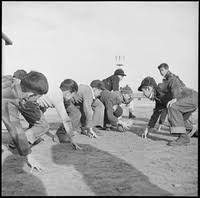 Under the modified rule, teams would be allowed one practice hike when a quarterback is under center, two in a “wildcat” or single-wing formation, and three in the shotgun.  The change must be approved by a majority of touch football teams across the country in order to take effect.

The move to add a fourth “Mississippi” count is designed to increase scoring, which had fallen because of standardized testing requirements imposed on states by the federal government.  “We were getting games that would end with low scores like 60-54,” notes assistant commissioner Earl “Bud” Bucholz of Cupertino, California.  “I know we have to pretend that schoolwork is important, but let’s not get carried away.”

The league was formed by a merger with the former American Two-Hand-Touch-Below-the-Waist League in 1980, and is headquartered in the former summer home of President John F. Kennedy, who is credited with rule changes that made the game socially acceptable.  “JFK let girls play for the first time,” notes touch football historian Alden Paine.  “When he did, it would be two-hand-touch-above-the-waist.”

Available in Kindle format on amazon.com as part of the collection “This Just In–From Gerbil Sports Network.”

One thought on “NTFL Caps Practice Hikes, Adds One Mississippi”