WELLESLEY FALLS, Mass.  Beth Upshaw is both a painter herself and an intrepid soul who helps others make a living in the hand-to-mouth world of the arts by operating an gallery in this upscale suburb.  “I know I could make more money at a nine-to-five job,” she says as she adjusts the frame of a work by her friend Cecilia Carver, “but I wouldn’t get that little glow you feel when you make the world a more beautiful place.”

That can-do attitude is what led Upshaw to take money out of her retirement plan–at a tax penalty–to open bEth uPshaw sTudios, as her stylized logo expresses it.  “It throws people off their guard for a second–they stop, look and hopefully come in.”

But Upshaw is off her game a bit as she opens up this morning; a fight with her boyfriend Kurt Mergen Saturday night has put a damper on her spirits, and she has to work harder than usual to greet customers pleasantly, much less cheerfully.  “Kurt didn’t like his wine at Boit de Nuit,” she explains of their dinner date gone wrong, “and things spiraled downhill from there.”  Upshaw took a sniff and told him not to be a whiner because the restaurant was busy and a woman she knew was waiting on them.  Mergen got defensive, saying he knew more about wine than she did, and Upshaw reminded him that she’d been a sommelier in a previous life in 19th century France. 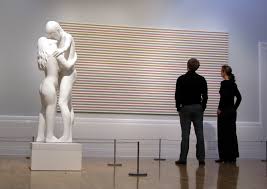 “The catalog says this is the air conditioner vent.”

That was the last straw for Mergen, who rolled his eyes and then struck at her most vulnerable spot; her own art, which she describes as “post-neo-pop-Abstract Expressionist.”  “I have a hard time imagining you in that context,” he snapped as he tore a piece of baguette in half.  “You, who produces the kind of art that wouldn’t look out of place on the wall of a bank lobby.”

Color rushed into Upshaw’s face, and her eyes narrowed to grim little slits as she hissed “You son-of-a-bitch!”  Diners seated nearby who didn’t hear her realized there was a problem when she stood up, put on her coat and scarf and stormed out of the restaurant, stopping only to take a mint at the cash register.

“I’m fine now,” she says as she excuses herself to wait on an elderly couple who’ve come in to browse, “but that bastard has had his last free plastic cup of chardonnay and cheese-on-crackers at my gallery openings.” 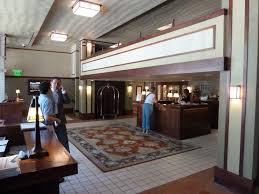 “Excuse me–none of these pens work.”

The customers–a man and woman who have moved into a +55 year-old condominium complex up the street from Upshaw’s gallery–congratulate Upshaw on the life and color that she brings to their new neighborhood.  “People who think the suburbs are boring should come see your little place!” the woman gushes.  “I had no idea we were moving into a Little Bohemia here.”

Upshaw demurs appreciatively and leaves the two to themselves, offering to help them if anything “catches their fancy.”  After a turn around the gallery the man comes back to her desk and asks about a piece that holds pride of place on the largest wall in the all-white space; a striking red, yellow and blue work that Mergen once compared to a Wonder Bread bag on acid during a previous argument between the two young lovers.

“Well, that one’s by me!” she says with a note of modest self-approval in her voice. 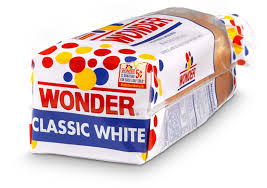 Wonder Bread bag (not on acid)

“Oh, you’re an artist, too!” the woman exclaims, and Upshaw blushes just a bit.  “Well, I’d better be after what my parents spent on my MFA!”

The older couple laughs, and the man explains that they just wrote their last tuition check the previous spring.  “How much is this one?” he asks as his eye roams over the canvas.

Upshaw gulps just a bit; she can tell the two aren’t hagglers, so her fear is they will walk out if she tells them that she was hoping to get $5,000 for it.  The bitter memory of the night before has given her a stiffer spine, however.  “I am an artist, dammit!” she says to herself as she recalls Mergen’s brutal put-down.  “And I deserve to be paid what I’m worth!”

She surprises herself by blurting out “Five thousand” before her resolution can become sicklied over with the pale cast of modesty, and is shocked when the man says “That sounds reasonable–I’ll take it!”

The transaction is concluded happily at the gallery’s point of sale terminal, and Upshaw says she hopes the couple will enjoy the painting in their new home.

“This isn’t for the condo,” the man says.  “I’m the president of the new bank that’s going in up the street–I’m going to put it in the lobby.”