The half-way point of my Sunday bike ride always makes me fear for the future of this great nation of ours.  I stop at one of the coffee places that mark the turn-around point of my three regular routes, and at each I am confronted by the sad products of American K-12 education. 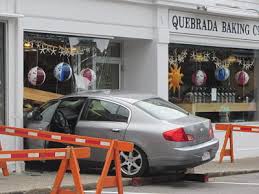 Talk about absurd–I was nearly killed!

This week was no exception.  One town over from us is a community where the kids are such high achievers that getting into Penn is considered failure, and yet when I buy a cup of coffee for $2.25 and give the young woman at the cash register a ten-dollar bill a look of consternation clouds her face. 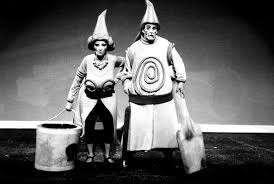 After more than a few moments of hesitation, she hands me a five, a one and three quarters.

“Aren’t you forgetting something?” I ask.

“Right, thanks,” she says, genuinely grateful that I’ve rescued her from an arithmetical blind alley.   She hands me a bill with America’s first president on it, and I’m on my way.

It’s incidents like this that have inspired me to include an educational component in our Halloween festivities every year, one that will help fill the gaps left by our one-size-fits-all, homogenized, teach-to-the-test, overly-hyphenated mode of schooling.  I try to include subjects that are excluded from the current K-12 curriculum, even though they form an essential part of our cultural heritage–like Absurdism.

Absurdism, as every schoolboy ought to know but doesn’t, plumbs the meaning of the meaningless; the harmony of the incongruous; and the rationality of the irrational.  Personally, I can’t think of a more valuable tool to give to young people on the verge of adulthood. 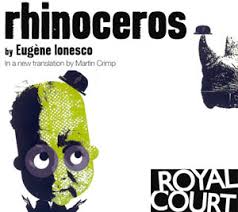 I’ve decorated the walk up to our front door this Halloween with important figures from the history of Absurdism; there’s a rhinoceros with a roadside attraction plaque that tells kids about the Eugene Ionesco play.  There are six characters from a play by Luigi Pirandello, but no Pirandello; duh–they’re in search of the author!  I’ve got a Søren Kierkegaard effigy, or rather several, each representing one of his many pseudonyms. 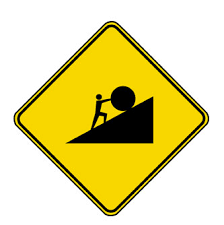 Once the kids make it to the top of our driveway they see Sisyphus, the figure from Greek mythology popularized by Albert Camus.  He’s just about to push the rock to the top of the hill on which our house sits when–oops!–it rolls down and he has to start all over again.  Don’t worry, I’ve placed a number of cautionary signs–in the original French–along the way so kids have plenty of warning when the avalanche starts. 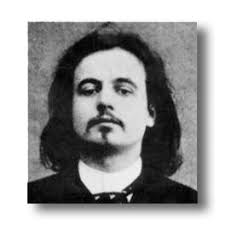 As for me, well, I’ve written a play about Alfred Jarry that was performed once in Cambridge, so I’m able to dress up and play the part of the guy who pretty much started it all–Pere Ubu, the protagonist in Jarry’s play Ubu Roi, a work that some in the audience (including W.B. Yeats) considered to be revolutionary.

And yet and yet and yet–the play began as nothing more than a satirical sketch by a bunch of fifteen-year olds about their fat, bumbling physics teacher.  For this reason Ubu struck a chord with me that is still twanging since I first encountered it in my late teens; after all, I too had a bumbling physics teacher, one who for some reason pronounced the word “around” as “areerin”–so easy to mock!

Our first visitor this Halloween is little Deborah Fairchild, the eight-year-old daughter of a pair of certified public accountants who live down the street, accompanied by her dad, Bob.  There was some concern early in the couple’s marriage as to whether the offspring of two C.P.A.s would be feeble-minded from inbreeding, but little Debbie has turned out just fine.

Pere Ubu, as he appeared in off-Mass. Ave. (Cambridge) play.

“Trick or treat!” she squeals and I recoil in mock horror.  “Don’t be scared–I’m an angel!” she says, and it’s true, both literally and figuratively; her costume couldn’t be more appropriate for a little girl who has a 4.75 weighted GPA in elementary school deportment.

“Oh, okay,” I say, holding out our big plastic pumpkin with the candy inside.  “How are things in heaven?”

“Fi-ine,” she says as she scoops handfuls of Milky Ways, Snickers and other sugary plunder into her bag.

“You’re Mr. Chapman,” she says as she throws a Bit-O-Honey back in my bowl.  As I say–smart kid.

Bit-O-Honey:  The bad cold of Halloween candy–you can’t get rid of it!

Kids–they’re so cruel!  Sure I dress funny sometimes, but I have an excuse–I don’t give a shit.

“Well, there’s a substitute who’s real fat, and we can usually trick her into thinking we’re still on Chapter One of every book even though it’s almost November.”

“Uh, I don’t know if I want my daughter to be disrespectful to her teachers,” my accountant friend says, a model of circumspection.

I turn the full intensity of my Absurdist soul upon him.  “Has science ever progressed except by challenging the past?” I ask scornfully. 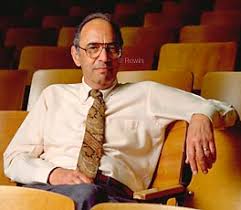 “Everybody always saying ‘The science is settled’ these days–doesn’t anybody read ‘The Structure of Scientific Revolutions’ by Thomas Kuhn anymore?  Have you?”

“Well, no,” Bob says.  “I double-majored in accounting and accounting.”

“Huh,” I say, genuinely impressed with Bob’s willingness to go all cautious belt-suspenders-and-jock strap even as an undergrad.  “You know, something similar happened to me when I was in college.”

“I took French Theatre of the Absurd, and I liked it so much–I took it again.” 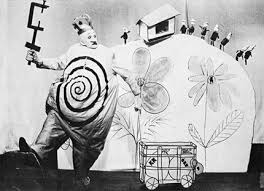 “Well, you did it with accounting, I did it with the absurd.  Granted, I was a little confused.”

“No, not how you got confused.  Why did you take the same French course twice?”

“Not entirely–I’m sincere in my beliefs.  It’s the only non-sensical world view that makes sense of the world.”

He gives me a look–you may know it; the fear that your neighbor is at some point going to bust a synapse and start parking a truck in his front yard, or leave the Christmas decorations up until Fourth of July.  A little madness in a neighborhood can wreak havoc with property values.

“Okay, Sweetie, that’s enough candy,” Bob says, laying his hand on his daughter’s wrist to guide her gently on to the next house, where I can sense he hopes the cool waters of rationality will be flowing again.

“That’s okay, we always have leftover candy.  That’s what half-acre zoning will do for you.”

“She’s such a good little girl,” I say with an avuncular tone, even though I’m not her uncle.  “Are you . . . inculcating the principles of absurdism upon her impressionable young mind?” I ask hesitantly, fearing the worst.

“Well, no,” he replies sheepishly.  “She’s got school all day, then Kinder Kick soccer.”

I cluck my tongue loud and strong.  “You know,” I say, “physical fitness is fine, but what about psychical fitness?  How are our kids going to compete in the crazy, mixed-up world of the 21st century if we don’t teach them the fundamentals of Absurdism?”  I’m trying to be diplomatic, but god damnit–I’ve half a mind to report the Fairchilds for child abuse.  The other half wants to report them for boredom.

I’m so disgusted I decide to take matters into my own hands.  “Debbie–sweetie?” I say gently, tenderly, trying to get her to focus on something other than the bag of Swedish Fish she’s hauling in.

“I’m going to do a little diagnostic testing on you, okay?  Like they do at school to see if you’re color blind or going deaf.”

“What kind of test?” her dad asks.  The guy just can’t turn off his internal three-ring binder.

“I want to see whether her capacity for the absurd has atrophied due to excessive exposure to ratiocination.”

“It’s like the radon in your basement.  You can’t see it, but it’s all around you and if you get exposed to too much of it, it can be very harmful.”

“Well, okay,” her dad says.  He makes a great show of looking at his watch to make me think they can’t stay much longer.

“Okay,” I say, and crouch down so I’m looking the little girl straight in the eye.  “What would you say if I told you that this morning I took a sponge bath of two-tone wallpaper?”

“That’s good,” I say, nodding and turning to show her dad the prognosis is favorable.  “Okay, what if I said my house dresses up like a dying monkey?”

“She’s fine,” I say to her dad.  “There’s no reason to think she won’t lead a full and productive life.”

Then I turn to Debbie for a final word of comfort.  “Sweetie–do you have a Barbie doll?”

“Well, I want you to know that—while your mommy and daddy love you very much—my parrot wants to sniff your Barbie’s armpit.”