It was the Friday after Thanksgiving and the football team had gathered to check in their equipment at the stadium. The atmosphere was a mixture of chagrin and relief; the team had lost the last game of the season and finished 5 and 5, no great shakes, but at least all the hard work was over. There hadn’t been that many seniors on the team—only five—so that was some kind of excuse. There had been six sophomores who saw a lot of action on offense or defense, and a couple of others who played on special teams, so the coaches were optimistic about the future and in a good mood. 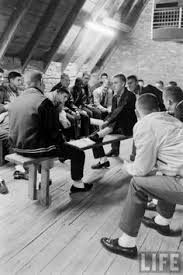 Joe was one of the seniors, and the only one who hadn’t earned a letter at the start of the season. He was a bit undersized, but there were smaller kids who were better than him. He was fast enough—technically he was a halfback and defensive back—but he didn’t seem to make good use of his speed. He tended to run in a straight line, as if he were a chalk mark on the coach’s blackboard, and so when a hole closed or never opened he went nowhere, and on defense, he’d run right at a guy who’d put a move on him and be gone.

He’d done everything they’d asked all four years he’d played, but he was still on the junior varsity the year before. He got a dinky junior varsity patch that he put on his right breast, but on his left all he had was a letter for speech and debate. From a distance they all looked the same, and so Joe would pal around with the other four seniors and hope that their reflected glory would shine a little status on him. 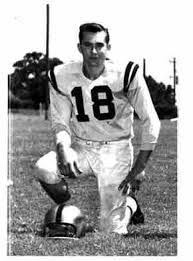 He thought he’d built up a fair amount of goodwill with the coaching staff, then the school had gone and fired the head coach from the year before and replaced him with somebody from a junior college in Kansas. It was the man’s first head coaching job—he was apparently an offensive genius—but it meant that Joe had to start over and show the new man what a hard worker he was even if he wasn’t that good.

The coach had laid down the law the first day of practice, August 15th. He’d handed out a mimeographed sheet telling you what the rules were; everybody had to get a crew cut, coats and ties on game day, no alcohol, no smoking, and an eleven o’clock curfew. There was to be an honor system—if you saw one of your teammates break the rules you had to turn him in. And you had to run a six-minute mile with your equipment on—after practice. You had to keep trying until you could do it.

Joe had accomplished the feat the first day—he’d been in training all summer long—but the coach barely noticed it. He just made a check next to Joe’s name on his clipboard and yelled at the others who came in behind him.

It had continued like that the whole season. Joe was on the scout team, but he was never called upon to play the part of the other team’s number one back; when the head coach stepped in to demonstrate something, he was always directing his instruction towards the first team. Joe might have been just a cog in the machine, his dad told him, but machines still needed every one of their cogs. Hang in there, he’d said; hard work is the one thing that’s always rewarded in this world.

You had to play twenty quarters—half the season–to get a letter; Joe didn’t know if the assistant coaches kept close track, but he knew he had been in nineteen. There were three quarters—two of them mopping up–against a weaker team the first game, and he’d allowed himself to get his hopes up. Then there were three non-conference games that he got into for two quarters each on the kick-off team. He figured if the team played halfway decent ball he’d get at least two quarters a game the rest of the way, once when they kicked off at halftime or the beginning of the game, a second time when they scored. By the end of the fourth week he had nine quarters.

The fifth week the conference schedule began, and the coaches began to pit one player against another for playing time to see who was tougher. They had “hamburger” drills halfway through practice every day; one-on-one challenges to see which kid would drive the other back, no “cupping” around because there were tackling dummies on either side so you had nowhere to run. Joe didn’t see what that had to do with his position; he was a back, not a lineman.

Some of the younger backs were sturdier, more compact than Joe, who was wiry. He’d tried everything to put on weight, drinking milk shakes and supplements, but then he’d run it off trying to stay in shape. He told himself it was better to be lighter and quicker and in good shape when August rolled around than to be heavier and puke up your guts the first week. 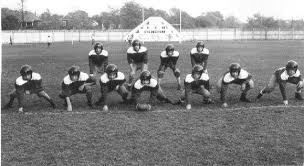 And so when it came his turn for the hamburger drill he got pushed around, and would grow frustrated that a bunch of sophomores were gaining on him, then passing him on the depth chart. He couldn’t believe the coaches would put some younger kid into a conference game that counted against a good team, he who’d been working so hard for so long.

So at the halfway point in the season he had eleven quarters, then he only got into two quarters the next three games, then only one quarter the last two games–that was nineteen. He figured they’d round up, or cut him some slack because he was a senior. It was no skin off their nose whether they gave out one more letter, he figured.

He sat on the bench next to his locker and fiddled with his stuff, waiting for the head coach to come out of his office so he could say goodbye and thank you, maybe talk to him for a second. His dad had told him that was important, that was something you’d learn in life; to make a connection with people, look them in the eye, make a good impression so they’d remember you when the time came to make an important decision. Joe knew his dad was talking about adult things like raises and promotions, but there wasn’t anything more important to him in the world right now than getting a football letter.

He saw the coach emerge from his office with Don, one of the sophomores, a little water bug of a kid with acne and glasses who didn’t look much like a football player, but who played with a reckless abandon that scared Joe a bit, and the defensive coach named Skip.

“I’m gonna sleep outside the night before,” Don said with a big smile on his face. He shook Skip’s hand and walked off looking down at a piece of paper the head coach had given him, and the two coaches watched him go with obvious appreciation of a fine piece of football flesh.

“Coach?” Joe said softly and then, when he saw the two men talking to each other, “Coach?” a little more firmly.

“Well, thanks, Joe, nice of you to say that. I came in not knowing anybody and it’s nice to hear I had some impact on people.”

“No, really, it was a great year even though we coulda done a little better, I think you’ve got a nucleus here for next year’s team.”

“Okay,” the head coach said. “I’ll be in the office for awhile.”

The head coach turned and started to walk away as Joe spoke, after swallowing a little.

The coach didn’t hear him at first, so he spoke again.

“Yeah? Oh, sorry, I thought we were through here.”

“I was wondering whether I was going to get a letter.” Joe looked straight ahead at the coach, but he felt the eyes of the players behind him trained on his back.

“Well, Joe, I don’t know what being a senior has to do with it. It’s not a perfect attendance award. You get a letter in football for accomplishing something, not just showing up. You have to get into the games and knock somebody on their butt.”

Joe inhaled, even though his lungs already felt full. “I think I had enough quarters, coach . . .”

“I don’t think so Joe. I’m pretty good at arithmetic. Even if you did, hell, son, you have to make a difference out there on the field.”

The room had grown quiet as the man and the boy spoke. “Coach, I tried to make a difference every time I got into a game.”

“This is a good lesson for you,” the coach said, then turned to face the boys sitting on the benches that ringed the room, “and for all of you boys. This is a life lesson for you all, right here. Don’t ever confuse effort with results—got it?”

Joe couldn’t see the boys behind him but he could feel them exhale, as if relieved that they were being spared as another was sacrificed.

“It doesn’t matter what happened before I got here, son,” the coach said with a half-measure of empathy in his voice. “The only thing that matters is what I think because I’m the head coach now. If you can understand that, you can understand why I can’t just hand out football letters like they’re penny candy. That wouldn’t be fair to the other kids who came out and worked just as hard as you—maybe harder–but who got better than you, see?”

Joe looked down and said “I see,” and then “thanks.”

“No problem. Hey, good luck in college next year wherever you go, okay?”

The coach stepped into his office and Joe walked over to the bench and stuffed his gym bag with the few items of equipment that were his to keep; his mouth guard and his jockstrap and an extra pair of socks he kept in his locker.

He knew all the other boys in the room to call them by their first names, but he said nothing to them as he walked out.