NATICK, Mass.  The start time for one of the Boston area’s many charitable walks is fast approaching, but while other fund-raisers are stretching and filling water bottles, one couple remains in their car, the distaff side with her head in her hands.

“Why did you have to say that to my mother–of all people!” Lynn Herrikus is saying to her husband Jason.

“She left herself wide open,” he replies, explaining, but not justifying his crack “So you like the feel of a wild beast between your legs?” to his 83-year-old mother-in-law after she said she’d like to try horseback riding.

Herrikus has CSAS, an acronym that stands for Congenital Smart-Aleck Syndrome, an affliction that walk sponsors say affects two million Americans.  “I was diagnosed at a very early age, long before the American Psychiatric Association listed it,” he says ruefully, but not entirely so.  “I figure as long as I suffer from my ailment, everyone else should too.”

CSAS victims are overwhelmingly male, and their symptoms grow worse as they hit middle-age and realize they will not achieve youthful ambitions.  “As they grow older their smart-aleckiness can take a darker turn,” says Dr. Oliver Maslan, a psychiatrist at the Massachusetts State Home for the Criminally Sarcastic, the largest public facility of its kind in New England.  “I don’t know why they’re so bitter.  Look where I ended up in life, instead of some cushy private practice in the suburbs.”

A “smart-aleck” is an obnoxiously conceited and self-assertive person with pretensions to cleverness, according to the current edition of the Physician’s Desk Reference.  Symptoms include a tendency to crack wise in inappropriate circumstances, although those outside the profession say no setting can ever justify a cutting remark since if you can’t say something nice, you shouldn’t say anything at all. 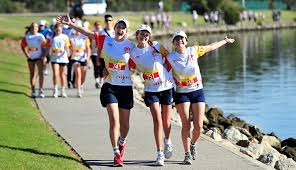 “We didn’t say anything smart-alecky the whole way!”

Proceeds of the walk will fund the cost of research at the Lauren B. Holcomb Institute for the Study of Cynical Expression, but Jason Herrikus says he has his doubts as to the prospects for a cure.  “Research–hah!” he exclaims as he strides a few steps behind his still-steaming wife.  “By ‘research’ they mean ‘new BMWs for all the lard-ass doctors on the staff.'”

Available in Kindle format on amazon.com as part of the collection “I Hear America Whining.”