I’ll never forget, ‘til I slip into the void,
The night my wife got an autograph from Oil Can Boyd.
We were dining in a restaurant in nearby Newton,
where people take yoga, and sleep on futons.

The former Red Sox pitcher was sitting at the bar,
making cracks about women, both near and far.
“Who’s that annoying fellow in the baseball cap?”
He was drinking a beer, but it wasn’t on tap.

I told her that he was a man named Dennis,
who’d excelled at baseball, but I don’t think tennis.
At some point in his life a fellow man
had tagged him with the nickname “Oil Can.”

“What does that mean?” she asked and I told her,
it referred to his drink, in the can that was colder.
“Down South booze is sometimes called ‘ignorant oil,’
because your cognitive faculties it tends to spoil.”

He was holding forth, so that all could hear,
a breach of decorum, that reached our ears.
Normally she would have harrumphed,
and that would have been that,
but some impulse over reserve did triumph,
and she shot out of her chair like a scalded cat. 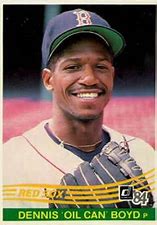 “Excuse me,” she said to the nutty right-hander,
“I was wondering if I could get your autograph?”
She’s normally not capable of such forthright candor,
but Can didn’t know that, didn’t count it a gaffe.

“Who’s it for?” he said with an upraised eyebrow.
He seemed . . . skeptical, and dubious somehow.
Was she playing the role of a distaff John Alden
while I—mortified—was the shy Myles Standish?
When a guy wants an autograph he does his own callin’–
instead of burying his head in his barbecue sandwich.

“It’s for my friend . . . David!” she said with a smile.
“Who’s David?” he asked, then supplied his own answer:
“I suppose he’s a kid who’s dying of cancer.”
I’d never seen her pull off such duplicitous guile.

Can eyed her up, then also down,
saw her wedding ring, made a little frown.
Cocked his head, made a little moue,
then signed a napkin, as ballplayers do.

She thanked him, and he watched as she walked away.
He didn’t seem to mind her, but down to this day–
I don’t know what happened, what turned her around,
to make her a late-in-life autograph hound.
She’d always been shy, and also retiring,
A mistress of etiquette, really quite inspiring.

She didn’t know Can from a hole-in-the-wall,
had no idea he’d begun his fall
in the ’86 Series, against the New York Mets,
that we’d watched together at a party one night.
He was the Game 7 starter, and he was all set,
to end Bambino’s Curse, the Red Sox fans’ plight.

But a rain delay allowed the Sox skipper
to start another hurler–Bruce Hurst.
Can didn’t like it, and not feeling chipper,
went to the clubhouse, and bad turned to worse.

He drank ignorant oil from twelve-ounce cans,
removing himself from relief pitching plans.
Except for one season, he was never the same;
with the Expos, in ’90, when he won ten games.

So the next time you see a former major leaguer,
in a bar having drinks, and you’re wife’s feeling eager
to get him to add his forlorn scribble
to an ephemeral item, stop her, don’t quibble.

The man’s entitled to his peace and quiet,
and he might need a drink–go ahead and buy it.