“We’re on the case,” said Assistant Commissioner Eleanor Mangel-Wurzel to reporters gathered for a briefing at Commission headquarters.  “No woman should be forced to endure high-speed contact on her way to the copy machine.”

“Bump drafting” is used by drivers at NASCAR “super speedways” such as Daytona Beach and Talladega.  Horsepower-choking restrictor plates on carburetors at such tracks keep speeds down, and drivers bump cars in front of them to maintain momentum in straightaways. “No I was not trying to pass you, Veneta.”

“I didn’t think what I was doing was wrong,” said Gene Ray Vaughn, a Dale Earnhardt Jr. fan from Knob Noster, Mo.  “Veneta Hicks was taking her own sweet time in the cafeteria line and I just sorta nudged her past the puddings and jello parfaits with a bump to the rear.”

Salisbury Steak:  The yellow “caution” flag is out.

As a result of Vaughn’s contact, both he and Ms. Hicks were able to accelerate past other workers clustered around greasy Salisbury steak and American chop suey entrees.  “There was an oil slick there that was really treacherous,” Vaughn said, using a vocab word he had picked up at State Fair Community College in Sedalia, Mo. 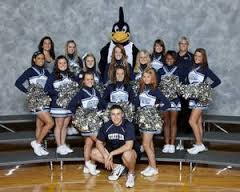 The EEOC regulations, which will appear at 29 CFR 1605, prohibit all bump drafting, regardless of sexual intent.  Hicks, a claims processor for an auto insurance company, applauded the move.  “Gene Ray has had his eye on me ever since high school.  If he wants to touch me he’s got to at least buy me dinner, and he throws nickels around like they’re bales of hay.”

In a candid moment, Vaughn admitted that his bump was motivated by more than a desire for speed. ”You ever watched Veneta’s hips when she walks down the hall in a tight skirt?” he asked this reporter.  “It looks like two hogs fightin’ under a sheet.”

Available in Kindle format on amazon.com as part of the collection “From NASCAR to NPR.”