The year was 1962. The place–a small town in Missouri so insignificant it billed itself as The Gateway to the Ozarks. Not the Ozark Mountains themselves, you understand, but if you wanted to get to them you had to go through us. Unless you were coming from the south, the east or the west, in which case you could avoid us and go through some other gateway.

I was one of five eleven-year-old boys who, because of our inadequate baseball skills, had been held back on a B-level Little League team, when others our age or younger had been promoted to the “A” league. Even John Rader, who couldn’t throw a ball and hit the broad side of a barn, was called up because his dad was chummy with–there I go again, angrily rehashing the past. It’s better to just let it go.

In any event, we were a bitter bunch, determined to strike back at the world that had so cruelly cast us aside to play with kids who were as much as two years younger than we were! We went on a tear and, after losing a game early in the season to the Lions Club team, we swept our way into the B League championship game where we defeated the Optimist Club team, whose members included Timmy Slater, a hot-shot ten year old who had made a cutting remark about me and the other over-the-hill retreads on our team earlier in the season. “See you next year,” I said facetiously to Timmy as we walked off the field. “Don’t gloat” my dad scolded me, but who could blame us for enjoying the comeuppance we had administered to our doubters.

For our efforts, we received trophies that were approximately four inches high, trifling little things that my kids, who receive hunks of metal that outweigh the Stanley Cup for losing, wouldn’t use as a doorstop. We had the rest of the summer ahead of us, however, and we were just getting started.

After every broadcast of a St. Louis Cardinals’ game on a local radio station, there was a feature called Baseball Quiz, in which an announcer would ask a question about the game–for example, who replaced left-handed pitcher Ray Sadecki in the seventh inning. The first caller to correctly answer it received an assortment of prizes that included unwanted 45 rpm records that hadn’t become hits and a variety of products provided by advertisers.

Since the typical caller was a pre-teen boy, this made a somewhat dubious reward for one’s efforts. What was an eleven-year-old baseball fan supposed to do with Mrs. Paul’s Fishsticks, Lipton Instant Soup, and the piece de resistance, a one-pound package of Roseland Lard?

Lard, in all its glory.

Lard, in case you didn’t know, is clarified hog fat that is used as a cooking oil, shortening or a spread similar to butter. Despite the efforts of British lard producers to glamorize the product, it is not generally associated with an upscale lifestyle.

These British toffs use lard–shouldn’t you?

But we were young–we didn’t know what to do with the stuff. So whenever one of us won Baseball Quiz, we’d give the foodstuffs to our mothers, then take the 45′s out in our backyards and throw baseballs at them until they were smashed to bits. The records, not our mothers.

Until one day it dawned on me, the only one of our gang who would go on to study free market economics at a leading research university, that we were literally throwing money away.

“Listen guys,” I said to my pals. “You know Andrew Carnegie, the robber baron who donated the money to build the Public Library?”

“He made billions because he was able to control the production of steel in America.”

“Wait–if we win Baseball Quiz every day, eventually we’ll have a monopoly on hog lard! People will have to come to us whenever they want to make fried chicken, or hush puppies.” 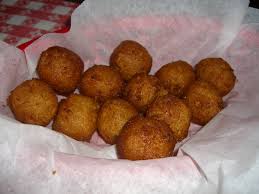 “What’s in it for me?” asked Wayne, our fireballing right-hander.

I hesitated before I spoke. After all, it was my idea. But Wayne was the guy who had carried us all season long, gunning down batters with his wicked sidearm delivery. Great business leaders don’t care who gets the credit, I thought, as long as the enterprise succeeds.

“You can be president of the company,” I said magnanimously. “I’ll be vice-president.”

“Okay–deal,” he said, and a conspiracy in restraint of trade was born.

For the rest of the summer we coordinated a rapid-response team that would tie up the phone lines after Cardinals’ games. We’d listen to each other’s answers–dialled in on rotary phones–risking earsplitting feedback if we called from a point too near our radios. Eventually, by memory or process of elimination, we’d come up with the correct answer and take home the hog lard.

Excess crappie: “Uh, thanks but no thanks.”

Soon, our mother’s refrigerators were full of the stuff. Just as neighbors would come back from the Lake of the Ozarks with hundreds of crappie they had caught but couldn’t eat, we had more lard than we knew what to do with.

But for some reason, the anticipated crisis in hog lard supply never materialized. Maybe it was because there is no shortage of hogs in central Missouri, or perhaps it was the availability of butter and margarine substitutes that eased the market chokehold we had hoped to create. As monopolists, we were failures.

My mother, cleaning the refrigerator one day, gave away her stash to Augusta, the country woman who did housework for us. My co-conspirators lost interest, or were forced to turn their attention to seventh grade, which loomed ahead. I was left with my shattered hopes of owning an agribusiness empire that would make me rich beyond the dreams of avarice. Oh, and a question that I continue to ask to this day.

You wouldn’t by chance be interested in a couple of boxes of Mrs. Paul’s Fish Sticks, would you?