AMARILLO, Texas. Joe Don Mergen has just a week and three days left before he begins the school year as a sophomore at Darrell Royal High School here, but he says he’s looking forward to it even though it will mean an end to summer fun. 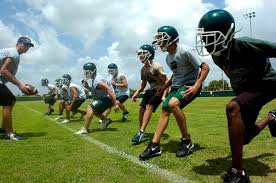 “It’ll mean the end of two-a-day practices, and I’m all for that,” he says.

Joe Don was a highly-touted halfback at Tommy Nobis Junior High School when a crushing tackle in the last seconds of a come-from-behind win over archrival Bum Phillips Voke-Tech left him with a fractured vertebrae, effectively ending a promising football career.

“I was real depressed there for a while,” he says. “I considered suicide, but I learned at Vacation Bible Camp that you can go to hell for that.”

“It gives you something to say to girls,” he says with a shy smile. “Most of the guys on the football team never get beyond ‘Wassup?’”

The frontier ethic that turned Texas high school football into a metaphor for the hardscrabble nature of life on the windswept plains of the adjective-rich Lone Star State has been carried over to high school poetry with the tradition of “two-a-day” practices. Morning practices begin at 6 a.m., and there is a second afternoon session every day until Labor Day.

“This is where we separate the Archibald MacLeishs from the Rod McKuens,” says head coach Jim Ray Dugan, a former English major at the University of Texas. “I don’t want to hear any sentimental ‘June-moon’ crap out there today-understand?” he barks at thirty young men who fear that they will be consigned to the school yearbook staff if they don’t make the cut for the Cowboy Poetry Squad.

After limbering-up exercises that include limericks and Burma-Shave rhymes, the boys divide into offensive and defensive groups, with Dugan taking the Romantics while his assistant, Ray Eberle, works with the Symbolists.

“Guys, we’ve got six weeks before we play John David Crow Prep,” he says, referring to a long-time powerhouse that had three representatives on the Parade Magazine High-School All-America Poetry Team the previous year. “You guys have got to be sharp, you’ve got to scan your sonnets pre-cisely, okay?”

“Yes sir!” the boys shout in military fashion. “Mergen–line up against A.C.,” the coach says, referring to an African-American senior named Alonzo Carl Byrd who is already drawing comparisons to Langston Hughes. “When I give the signal, you peel out, okay?” he says to A.C. 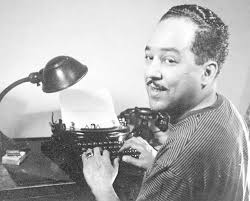 Langston Hughes: 9.7 yards after the catch

The boys take their positions across from each other at the line of scrimmage as their coach counts off a quarterback’s cadence–”Hut-one, hut-two, hut-three.” He slaps A.C. on the butt, and the wide receiver takes off on a traditional sideline-and-up pattern:

Old Bill Jones had two daughters and a song,
One went to Dallas and the other went wrong.

Mergen back-peddles and keeps Byrd in front of him, as he’s been coached. Suddenly, Byrd puts the “up” move on him after Coach Dugan pump-fakes a pass to the sideline.

His wife she died in a poolroom fight
While he kept singin’ day and night.

The juke-step has given the receiver a yard on the defender, and the coach lofts a tight spiral that Byrd is just about to haul in when Mergen recovers.

You’re wife’s as ugly as a bitch coyote
And you ain’t half the man of Truman Capote.

Truman Capote: “Why did you drag me into this post?”

“Good job, son,” his coach says gruffly, not wanting praise to go to the young man’s head with the home opener coming up.

As Mergen trots back up the field, his coach notices that A.C. Byrd is bent over, puking up his guts. “Goddamn it A.C.,” Dugan yells. “Were you out drinkin’ last night?”

“Just some amaretto while I worked on my sestinas,” Byrd says, obviously winded from an elementary pattern he should be able to handle easily if he had followed the squad’s mandatory offseason conditioning program.

“If you guys think you can go out there and sling a few similes around and beat John David Crow, you are sadly mistaken,” the coach says as he shakes his head. He blows his whistle and calls the entire squad into the middle of the field for wind sprints.

“All right, we’re gonna go at it hard today, cause I get the impression some of you been doggin’ it on me,” the coach says, and the budding poets inhale deeply, preparing themselves for the worst.

“Haikus and villainelles, stay right here. Elegies and terzanelles, over there.”

Available in print and Kindle format on amazon.com as part of the collection “poetry is kind of important.”