NEEDHAM, Mass.  Curtis Bascomb, Jr. is a third-generation family business owner, so he has more than just his time and money invested in his workplace.  “Grandad founded this place on a promise,” he says with a trace of a lump in his throat.  “He believed no poet should ever go without a figure of speech because of high prices.” 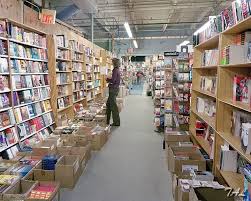 “I’m looking for a synechdoche for wine.”

And so the Poets Discount Supply House was born, a harmonic convergence of New England thrift and the historically impecunious nature of the poet’s trade.  “I’m entering my coming-of-age collection in twenty chapbook contests at an average of $22.50 a pop,” says would-be poet Todd Heftwig, who prowls the aisles looking for bargains.  “If I can pick up a slightly-used simile or metaphor at half-price, I may be able to recoup my investment.”

“There’s a size 7 and a half sestina back here with seagulls in it.”

In addition to garden variety figures of speech such as similes and metaphors, the Poets Discount Supply House carries more exotic forms such as synechdoches and metonyms, as well as a deli case stocked with onomatopeia and tropes.  “We buy this stuff fresh every day,” says Bob Vibeck, who started with the company when it was run by Bascomb’s father, Curtis Sr., in the 1960s.  “That’s why poets come back to us even when they hit the big time, which is really still the little time.”

The store is located in an undistinguished warehouse off a busy commercial street, part of the family’s business plan to keep costs down.  “We can sell you a package of three generic themes–seagulls, unrequited love, the effect John Coltrane’s music had on you in college–at half the cost of the high-end retailers,” says Curtis Senior.  “That’s our sweet spot.” 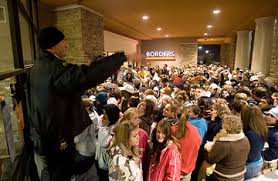 “If you need a rhyme for the word ‘love,’ line up on the right.”

The store is ramping up for what is usually its busiest time of the year, as shoppers stop in for a turn of phrase for a Thanksgiving toast, or get ready for Christmas proposals, when the family will bring in temporary sales help to handle the crush of smitten but unlettered Romeos.  “These guys come in here with something scratched on a cocktail napkin looking for le mot juste,” says Curtis Junior, shaking his head.  “I tell ‘em you can’t bring in your own stuff, you got to buy it here.”

Available in print and Kindle format on amazon.com as part of the collection “poetry is kind of important.”

One thought on “To Make Ends Meet, More Poets Turn to Discounters”