“Did I ever tell you about the time,” I began, but before I had a full sentence out of my mouth my wife stood up and blew past me into the kitchen of our neighbors, Carl and Jen Sitzfleisch, to refill her glass of chardonnay.

“Yes?” the distaff half of the other couple asked in an encouraging tone. 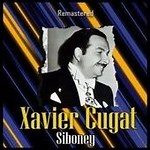 “Actually, it was back when I was in college, when I had a serious case of Pediatric Writer’s Block.”

“Tell us about it!” Jen exclaimed, and I could hear my wife yawn in the kitchen over the refrigerator door slamming shut and our hosts’ chosen background music: Xavier Cugat Plays Songs for Repressed Suburbanites.

“Saul Bellow, author of The Adventures of Augie March.  Surely you know its famous opening line: ‘I am an American, Chicago born–Chicago, that somber city–and go at things as I have taught myself, free-style.'”

“I didn’t actually have lunch with Bellow.  I had lunch beforehand, in the kitchen with the rest of the help.  I was just a waiter, not a member of Bellow’s inner circle of friends.”

“I wasn’t even a member of his circle of enemies, which may have been a slightly larger group, if one reads his works as romans a clef.”

“Let’s get your wife back in here to hear this story.” 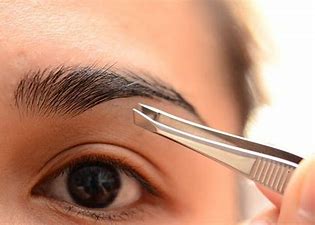 “Yes it hurts, but it’s less painful than listening to that story again.”

“Eyebrows make the woman!”  That was Jen, in case you hadn’t guessed.

“So I didn’t eat with Bellow, but I was at a lunch that he attended, which was as close as I’d ever been to literary fame at the time. And probably ever will be.”

Joseph Conrad: “Bellow? Never heard of him, but then I’m already dead.”

“I don’t think I’ve ever read anything by Bellow,” Carl said.

“I hadn’t either at that point in my life.  He wasn’t on my freshman reading list, and maybe he’ll never displace Faulkner, or Joseph Conrad, or Scott Fitzgerald. But he was a living, breathing novelist with an international reputation, who would go on to win the Nobel Prize six years later. It was all I could do not to rush up to him like some stupid Hollywood autograph hound and say ‘Mr. Bellow, you’re one of my biggest fans!'”

“Why is that waiter staring at me?”

“Nope.  I respected his privacy and stuck to my role, bringing out the food, filling water glasses, sneaking a peek at the two greatest hits underneath the blouse of the Barbra Streisand look-alike on my shift.”

“She does have a balcony you could do Shakespeare from,” Carl added with a leer.

“I watched his every move, because I wanted to see how a famous novelist looked and acted. Would he be ferocious, skewering the chalky professors at his table?  Would he be captivating, regaling his listeners with stories of his years in Europe? How exactly was a minor living legend supposed to behave–just in case I ever needed to know.”

“He sat down at an empty table, crossed his legs, folded his hands in his lap, and looked around the room with an expression that said he’d rather be dead in a ditch than where he was just then. My guess is the luncheon was a dog-and-pony show for potential donors–just the way a guy who probably had to fend off high-brow literary women with a stick would want to spend his day.”

“That’s a nice problem to have,” Carl said.

“Being a big-name author in academia isn’t a bad gig. You give a graduate seminar every semester, boff a couple of coeds–it’s in the contract, right after the ‘Whereas’ clauses–get your picture on the cover of the alumni magazine.  But you’re also there for some contact with actual human beings, like say a wealthy alumnus/alumna who’s written a first novel.”

“Bellow’s aspect was distant, reserved,” I continued.  “Everyone who passed by knew he was–famous. So no one joined him at first.”

“Writers must be such lonely people!” Jen exclaimed.

“It’s their lack of social skills,” my wife said as she rejoined the group.  I noticed she looked at her watch as she sat down.  “Our reservations are at 7:30,” she said.  “How much longer is this story going to run?”

“To each his own,” my wife said, then checked her phone to see if it was her move in the eight different games of Words With Friends she has going at any one time.

“After a while Bellow took his butter knife, stood the pat of butter on his bread plate up on edge, and put his knife down again. A few people eventually sat down at his table, introduced themselves, and he broke into a slight smile, which did nothing to dispel his air of ill-suppressed discomfort.”

“It would have been sad if he’d had to sit by himself,” Jen said.

“Not sure he wouldn’t have preferred that,” I said.

“Seriously.  I was distracted for a moment by someone at another table and when I turned around–he was gone. The only evidence of his brief presence that remained was that pat of butter on its edge, as he must have been the whole time he was there.”

“So, a Literary Man of Mystery, huh?” Carl mused.

“Has this close encounter with fame ‘informed’ your work?” Jen asked.  She’s taking an adult education course in The Literature of the New Jersey Pine Barrens.

“It has, it has,” I said, putting my glass down and making a little church-and-steeple with my hands as I looked off into the middle distance.  “I learned a valuable lesson that has come in handy over the years.”

“Just this: If you want to be a successful writer, you have to appear superior to everyone around you at social gatherings.”

“Look bored–and play with the stuff on your table!”

“Gosh,” Jen said.  “I thought it was about the beauty of the writing, and the universality of the themes, and the feelings of sympathy for the characters a good writer can elicit in the reader.”

“Nope.  All that stuff is for saps, as Nelson Algren, another Chicago writer, might say.”

“Can you tell us how, exactly, you do it?” Carl asked.

“Sure.  Here are a few of the techniques I’ve perfected that lend me an aura of literary snootiness at gala dinners, business lunches and power breakfasts.” 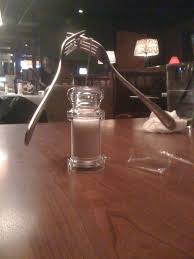 “My favorite is to balance two forks on a toothpick.”

“Snap a toothpick at its mid-point and stick one end in a salt shaker. Join the forks at the tines, and suspend on one end of the toothpick.”

“Where are you going to find a toothpick in a faculty club of a major university?” Jen asked.

“Just ask the Assistant Professor of Long-Haul Trucking sitting next to you.”

One out of three ain’t bad.

“I can’t see how that’s going to impress anybody,” Carl said.

“I agree, it’s too easy.  One that’s easier than it looks–and my personal favorite–is to drop a wine cork so that it stands up on one end.”

“I could never do that!” Jen exclaimed.

“Sure you could.  You hold the cork horizontally, so that it ‘s parallel to the surface of the table.  My preferred grip is between the outstretched second and fourth fingers, although this leaves the middle finger pointing across at your tablemates, which may lead to misunderstandings. Hold the cork gently, then release both fingers at the same time. At first, if you succeed in making the cork pop back up on its end just one time in ten you’re doing fine. With practice, you should be able to do it in three tries or less, causing ingenue poetesses to look on you as a God of Belle Lettres.”

“Do the wine cork trick again–it drives me wild!”

“Sweetie,” it was my wife again.  “We really should be going.”

“Is there any way you can get others involved?” Jen asked, and I noticed she blushed just a bit.  “In case there’s . . . another budding writer at your table.”

“Well, you could try the matchbook field goal trick.”

“You can’t smoke in most fancy restaurants and clubs anymore, but for some reason you can get a book of matches–what you’re supposed to use them for is not exactly clear.”

“Right.  You stand the matchbook on edge and flick across the table at finger goal-posts set up by a table-mate.”

“So you need the cooperation of another bored person?” Jen asked.

“Right,” I said, “but the Nobel Prize in Literature is optional.”

Available in Kindle format on amazon.com as part of the collection “Dead Writers Make More Money.”