The great white shark is “one of the more charismatic, popular sharks in the world.” Greg Skomal, Senior Biologist, Massachusetts Division of Marine Fisheries.

I was walking along the beach in Hyannisport, enjoying the warmth of the fall sun, when I spotted a basking shark, Cetorhinus maximus, lying propped up on one fin, staring out at the Atlantic.

It’s the time of year when folks on Cape Cod are more outgoing since the tourists are gone, so I sidled up to him.

“Okay,” he muttered. I could tell he wanted to be left alone, but the Cape has a fairly high suicide rate, and I wanted to make sure he wasn’t so depressed that he’d try and end it all. If he made it to the Sagamore Bridge, the most popular place around here to commit self-slaughter, to wax Shakespearean for a moment, he’d tie up traffic for hours and I wanted to drive home around 2.

“Just okay?” I asked, hoping to get him to snap out of his melancholy reverie.

He let out a sigh. “‘Okay’ is exaggerating,” he said finally. “Pour some water on my gills, would you?”

I picked up a styrofoam Dunkin’ Donuts cup and filled it with water. “Yuk,” he said. “French vanilla.”

So what’s the matter?” I asked.

“Did you see The Herald the other day?” he asked. We’re still a two-paper town; sharks read The Herald, dolphins read The Globe.

“It’s the first thing I read in the morning,” I said. “Was it something on the op-ed page?”

“No, a news item. Some ‘Senior Biologist’–whatever that means–said that the great white is one of the ‘more charismatic, popular sharks in the world.’ I nearly sprayed my chum all over the sports page.”

Perhaps I shouldn’t have been so blunt, but sometimes that’s the best way to handle a mopey shark.

He was silent for a moment, except for a hissing sound that put me on notice that an explosion was on its way.

“Goddamn it!” he shouted, slapping his fin on the wet sand. “I can’t catch a break. The whale shark is the biggest shark–I’m number two–and now I find out the great white is Mr. Popularity, Mr. Charisma.” 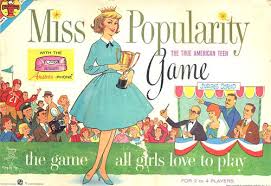 Miss Popularity, board game once owned by my sister.

“The guy didn’t say the great white was the most charismatic or popular shark. And I can think of lots of sharks with less charisma than you.”

“Well, to be completely bipartisan about it, there’s Rahm Emanuel for the Democrats. And Ted Cruz for the Republicans.”

I let him stew for a moment, then began as quietly as I could. “You know, being charismatic and popular isn’t all it’s cracked up to be.”

He rolled over and gave me a look; receding hairline, big forehead, nerdy glasses. “And how exactly would you know?”

“Which one–‘How to Win Friends and Influence People’?” he asked with a snort.

“Did you know that Dale Carnegie was born in Sedalia, Missouri–the town where I grew up?” I said, with no small amount of misplaced pride.

“Who cares?” the shark said. He was really in the dumps–I decided to stop being so flip for once.

“No, it was Max Weber’s On Charisma and Institution Building. Did you ever read it?”

“I’m not a big reader. The only reason I finished Jaws was some doofus threw it at me when I got too close to his kayak.”

“That was a very successful book,” I said. “You can’t begrudge the guy a little positive p.r.”

“Hey–look me up in Wikipedia. It says I’m a ‘cosmopolitan species, found in all the world’s temperate oceans.’“

“Well, you’ve got that going for you. On the other hand,” I said in a voice that reeked of reasonableness, “the great white has been glorified in movies and ESPN 2 fishing shows.”

I thought his defensive tone gave him away. “You’re just jealous,” I said.

“Jealous?” he said. “You think I’m jealous of a mackerel shark that’s so dumb it can’t tell the difference between a boogie board and a seal?”

“Here’s the deal with charisma,” I said. “Weber said that in a democracy it’s difficult to maintain because it’s based on short-lived mass emotion.”

“So that would explain Biden’s approval ratings right now.” he mused.  I was glad to see that he wasn’t so depressed that he’d stopped paying attention to current events.

“You got it. You can’t help but like the guy, but the Kool-Aid’s worn off for some of his cult-like followers.”

“The New York Times turned on him the other day,” he said.  I was impressed–not that many sharks read the Times on the Cape because they add a dollar to the cover price for transit costs.

“And some comedians are starting to mock him.”

“Not just Bill Maher, Stephen Colbert, too,” I said, then was silent for a moment.  “Maybe you should stop worrying about other sharks, and work on your own personality.”

He rolled over and looked at me. “You think so?”

“Just a suggestion,” I said. “Every summer you float into Boston Harbor and people panic even though you’re harmless, all because you come on like you’re going to bite the ass off of every bikini-bottomed babe on the beach.”

“I’ll give you props for alliteration,” he said. “But the great white is scary. How did he get to be so popular?”

“What works for him may not work for you,” I said. “You’ve got to be yourself.”

I started to fill the cup again, but he spoke up. “I’m fine, thanks.”

“Nope–all set. I think I’m going to swim over to the fish pier, entertain the kids a bit. Give me a push, would you?”

I got him back into the water and he turned to say goodbye. “This has been very helpful.”

“Where’d you pick up the shallow, pseudo-psychology that reduces apparently complex problems to simple answers composed almost entirely of words of one syllable.”

Available in Kindle format on amazon.com as part of the collection “Wild Animals of Nature!”