A trip back to my boyhood home in Sedalia, Missouri presents me with an opportunity to visit with Jim the Wonder Dog, the most famous native of my hometown with the possible exceptions of Dale Carnegie and Scott Joplin. Jim’s 97 years old in human years, which makes him something like 679 in dog years, so he’s not as spry as he was back in the twentieth century when he was amazing university psychologists with his uncanny predictions of Kentucky Derby and World Series winners, and translations of ancient Egyptian scrolls and avant-garde French novels. I pull up to the front porch of the Old Missouri Home for Aged and Infirm Canines and Jim hobbles down the steps to my car.

“Where the hell have you been?” he snaps. Same ol’ dog, I think to myself. We drive in silence for a while punctuated only by Jim’s wheezing. He can’t have much longer to live and I’m trying, as he reaches the end of his life, to make his final days as pleasant as possible.

“So who’s on TV these days?” he asks. They only have basic cable at the Home, and Jim–ever conscious of his legacy and the chances he missed by staying in the provinces–always grills me about rising canine stars. Jim coughs, or at least I think he does before I realize that he spat on the rubber floor mat of my rental car.

“You okay?” I ask, playing innocent.

“Lassie was a hack,” he says as he looks out over fields of soybeans. “She couldn’t act her way out of a 25 pound bag of Purina Dog Chow. Who else?”

“Let’s see–Rin Tin Tin had a biography written about him.” “Probably by some studio flack,” he grumbles.

“As a matter of fact, it was written by Susan Orlean.”

“Of The New Yorker?” he asks, incredulous.

“Good Lord–that magazine has gone to the humans ever since Harold Ross retired,” he mutters. “I mean–Rinnie’s not a bad guy, don’t get me wrong, but he’s no James Thurber.” Susan Orlean: Her writing’s gone to the dogs.

“The whole general circulation magazine market is just about dead,” I say as I turn into Hardee’s, home of the Monster Thickburger, or as its friends call it, “Audacity on a Bun.”

We have to drive through due to local health regulations that ban dogs from common victuallers’ establishments, even though a former President of the United States has admitted to eating dog in his youth.

We get our burgers and park in the lot just as we used to do back in my misspent youth at the Wheel Inn, home of the Guber Burger. After the grease relief flows over our taste buds, Jim loosens up just a little. “So, it must be easy for you to find all the books you want in Boston, huh?” he asks, a note of envy in his voice.

“Actually, it’s harder than you’d think,” I say, as I pop a Suzie-Q french fry in my mouth. “Downtown Boston has no new book store anymore–Borders and Barnes & Noble both closed.”

“Huh,” he says as he stares out the window at a cute poodle giving him the eye from the passenger side of a Chevy SUV. “So, you buy e-books?”

“No, can’t bring myself to do that–yet.”

“I feel better about life in the sticks all of a sudden,” he says. I sense a turn in the tide of his mood and decide to try and wangle some inside sports dope out of him.

“So you think the Patriots will make the playoffs?”

“I have no idea,” he says. “Besides, that was all a parlor trick, those sports predictions.”

“Sure–who in their right mind would bet against the Yankees in the ’30′s?”

He had me there. “Who you reading these days?” I ask. Conrad: “Your dog is drooling on me.”

“I’m on a mission,” I say. “One Shakespeare play a year, one Dickens novel, one Conrad. Maybe someday I’ll catch up with you.”

“Not likely,” he says, and I don’t disagree. Jim is an unsung literary pioneer, his autobiographical stream-of-consciousness eponymous “Jim the Wonder Dog” occupying a place within its genre–dog literature–comparable to the contributions made by James Joyce and William Faulkner to human fiction. It’s clear that he absorbed the lessons of the avant-garde even as he was “setting” coveys of quail in the fields of central Missouri.

“How much did Clarence Mitchell contribute to . . .”

“Him? As Truman Capote said of Jack Kerouac, what he added wasn’t writing, it was typing.”

“You could have just hired somebody who wouldn’t want to share credit, the way Hillary Clinton did with ‘It Takes a Village or a Humongous Federal Agency or Department.’” 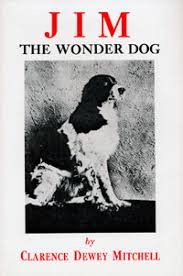 “Mitchell had me over a barrel. He had the contacts with the publishers, and he had the hands with prehensile ability to type. So I gave him the ‘by’ line.”

“It’s too bad,” I said as I turned the key in the ignition. Now everybody thinks it’s just another ‘as told to’ book, and they blame you for the typos.”

“What typos?” he snapped. Pride of authorship runs high among canine writers.

“At least one of my books has a second edition,” he said. He really knows how to hurt a fellow writer.

“As a matter of fact,” I begin in my own defense, “my first novel had a second edition.”

He casts a skeptical eye my way and snorts. “Meaning you self-published yourself twice? Isn’t that like switching hands after beating off?”

“CannaCorn was a stupid title.”

“In an edited, re-packaged edition with a new title–Making Partner.”

“Meaning you erased all the shameful traces of its prior existence by re-naming it and cutting out 150 pages of semi-autobiographical crap in the vain hope that you might actually sell a copy to someone who isn’t related to you by blood or marriage?”

I bristle, and more than a bit. This is how writers hurt each other, going for the jugular–financial success or failure–belying their oft-repeated claim that they write only for art’s sake.

“That’s a god-damned lie,” I say, my eyes and lips narrowed into a grim mask of menace.

“It’s true. Nobody on my wife’s side of the family bought a copy.”

Available in Kindle format on amazon.com as part of the collection “Wild Animals of Nature!”