FRAMINGHAM, Mass. Molly Yardnal is a stocking clerk at the Barnes & Noble book store in this suburb of Boston who’s finding it hard to do her job now that students have returned to local colleges and the aisles are jammed.  “I guess people are buying books because big-ticket items are too extravagant in this economy,” she says as customers squeeze by her. “Either that or they’re way cheap.” Today, Molly is working the humor aisle as she rips open cardboard shipping boxes filled with copies of “The Big Book of Presbyterian Humor,” the latest in a series of similar titles by Minoz Press. “Next to the Big Book of Jewish Humor and the Big Book of Catholic Humor, it looks kind of small,” she notes dubiously.

“If I told you you had a nice body, would you hold it against—never mind.”

“It should sell well as a Christmas stocking stuffer,” says editor Morris Korkin of his latest release, which runs to 24 pages including a table of contents, an index and a blank last page that can be used for taking notes during sermons. “Actually, you could fit two copies in your typical stocking.”

“I’ll be here all week. Be sure and tip your elders and deacons!”

American Presbyterians have been known as a humorless bunch since colonial times, when Founding Father Thomas Jefferson first noted a dour streak in the Scottish immigrants. “The Puritans put a man in the stocks this morning,” Jefferson notes in his diary at one point. “The Presbyterians came by later and criticized his outfit for being too casual.” 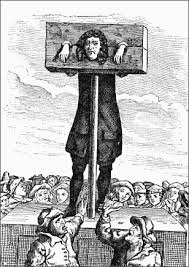 “He hath not got those breeches at Brooks Brothers!”

The book is being hailed by the denomination’s ministers as a helpful tool in defusing familial tensions. “Say two Presbyterian daughters get in an argument over whose David Yerman bracelet was more expensive,” says Rev. Scott Lee of the First Presbyterian Church in Duxbury, Massachusetts. “Nothing gets people in a good mood again like a joke that begins ‘A priest, a rabbi and a lady snake charmer walk up to the Gates of Hell.’” 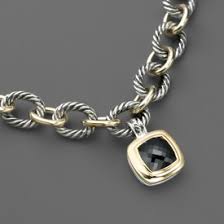 David Yerman bracelet: “Haven’t you got something a little more expensive?”

The age-old question—Is there such a thing as a dirty Presbyterian joke?—is answered with an emphatic “Yes” by the collection, with a knee-slapper involving a first-class airline passenger who “poops his pants” after a particularly bumpy flight, notes Korkin. 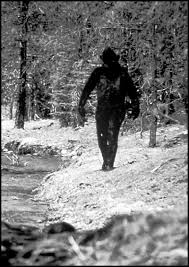 “You shouldn’t say ‘fart’–use a polite euphemism such as ‘toot.’”

“That’s the only one we found,” he says. “For years we’ve heard rumors there’s another, about a grandmother who farts when her family visits her in a nursing home, but like Bigfoot it turned out to be a hoax.”

Available in Kindle format on amazon.com as part of the collection “Our WASPy Heritage.”