NATICK, Mass.  St. Rocco’s Parish here is a survivor in an area of the state where Catholic churches have been closing or consolidating, and it is attention to “congregant service” that makes the difference, says its pastor, Father Greg Zwibeck.  “We try to have something for everyone,” he notes as he puts on his priestly vestments on a beautiful late August day.  “Sacraments for the devout, bingo for the elderly, fun events for the kids and requiem masses for the dead.” 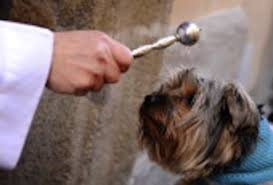 “May you have a summer filled with love, fun and Liver Snaps.”

A favorite celebration for children once summer ends is an annual “Blessing of the Pets,” which gives kids the chance to introduce their furry, feathered and finned friends to the mysterious but entertaining rituals of the Roman Catholic Church, which have been a source of solace for followers of the faith since it was founded in the year zero by Jesus Christ.  “Holy Water is a great way to lower a dog’s dangerously high temperature in the summertime,” says Sister Carmelo Anthony, the principal of the parish school.  “As long as the kids don’t load up their Supersoakers with it, everybody has a good time.”

But the happy atmosphere of the festive event this year is broken by the presence of Doug Schief, a local slacker who still lives in the basement of his parents’ home after dropping out of the University of Massachusetts-Seekonk.  Schief is older than any of the other pet-owners present today, the result of an oversight in the church’s bulletin last Sunday, which neglected to set an age limit for participants. 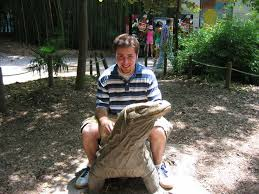 “C’mon Sparky, let’s go say high to the toy poodle over there!”

“I’ve been droppin’ money in the collection box since I was six,” the 24-year-old says as he tugs on the leash of “Sparky,” his 140-pound Komodo Dragon, a member of the monitor lizard family.  “I have more right to be here than some punk who just had his First Holy Communion.”

Father Zwibeck gives Schief a dirty look as the unemployed film major lines up behind little Amanda Clesko, who has brought her pet tabby cat “Miss Kitty” to receive the animal sacrament. 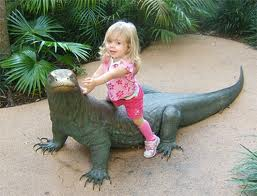 “Does your cat like to be sprinkled with water?” Schief asks the little girl.

“No, but I’m responsible for saving her soul,” Amanda replies as she pokes her finger in the screen of a plastic pet carrier, trying to calm the agitated feline who is upset by the barking of the many dogs assembled in the church’s parking lot.

“Why don’t you let her out for a little while,” Schief says helpfully.  “Cats hate to be cooped up.”

“I think I will,” Amanda says.  “It’s almost her turn.”  With that, the little girl unlatches the wire cage door, ties a long piece of yarn around the cat’s neck and shuffles forward to prevent Ronnie Glascup from cutting in front of her.

“See,” Schief says to Amanda.  “She’s not so cranky anymore.”

The little girl bends down to pet her pet, then shields her eyes to see why the line’s not moving.  “I hope Father Greg isn’t going to bless every one of Mary Pat Feltenthime’s guppies!” she groans.

“Me neither,” says Schief, who seems to be bonding with the little girl.  “If you’re hungry, I can give you some money for a snow-cone for you and Miss Kitty,” he says. 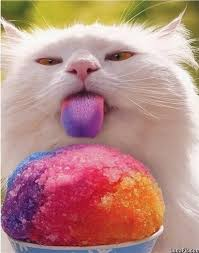 “Sure,” Schief says as he takes out a five dollar bill and hands it to the girl.

“No problem!” Schief says and the girl turns and heads across the parking lot to where an ice cream truck is parked.

“They’re so cute at that age,” Schief says to this reporter as he watches the girl run to get her cool treats.

“You’re next,” Father Greg says to Schief with a scowl as he finishes up with the owner of a cockatoo.  “What do we have here?”

“This is my komodo dragon Sparky and this . . .” says Schief as he looks down at the yarn leash.  “Now where the heck did that cat go?”