“Where some of the Neighbourhood were quarrelling, a Raven from the Top of a Tree very articulately and unaccountably cry’d out, Read the Third of Colossians and the Fifteenth!”

The Wonders of the Invisible World: Being an Account of the Tryals of Several Witches Lately Executed in New-England, Cotton Mather 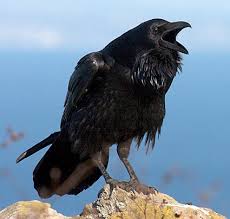 Boston is a tough town for a writer.  The last national magazine with headquarters here, The Atlantic Monthly, decamped for the more powerful hub of Washington, D.C. a long time ago, leaving us with a bunch of “quarterlies,” the derisive term used by A.J. Leibling to refer to the kind of rags that are read mainly if not exclusively by the contributors and their mothers.  In the realm of daily journalism, “a low-grade competition persists,” again to quote Leibling, but lately I’ve been shut out of that market too.  I’ve tried the weekly papers as well, and was lucky enough to find a place for my taboo-busting essay “How to Tell Your Teenaged Son From a Dead Rodent” in a suburban broadsheet that services our town’s area code, only to be told by the editor that he had no budget to actually pay freelance writers.  “You understand how it is,” he said casually with an insouciant air that recalled no one so much as Maurice Chevalier, as if he and I shared a common bond as worldly boulevardiers, bon vivants, raconteurs and crème brulees. 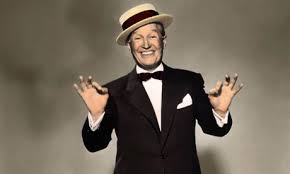 “Mon plaisir!  I could not accept a single sou from you!”

“Mais oui!” I said with enthusiasm.  “Compensation would only spoil the joy of writing for me!”  We parted friends, a necessity for all writers stiffed by editors–you want to stay on their good side so that they’ll take your next submission for nothing.

I was feeling pretty low so I decided to walk to work for a change–I didn’t feel like being jostled by people checking for granola between their teeth in the windows of the subway car.  As I made my way across the Public Garden, a lovely spot of green in the spring and summer but a dismal, grassless tundra in the winter, populated largely by drug dealers and tai chi practitioners except for people passing through, I spied the new statuary in the renamed Edgar Allan Poe Square and decided to take a look. 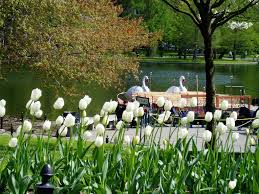 The Public Garden, when it’s pretty.

The thing struck me as further evidence, if one needed it, of the decline and fall of the once proud art form of sculpture.  Look at the Laocoon, fashioned by three Greek sculptors sometime between 27 B.C. and 68 A.D.  Now look at the statues going up around the country honoring retired baseball players and still active college football coaches.  The thing, as the lawyers say, speaks for itself. 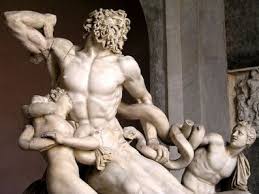 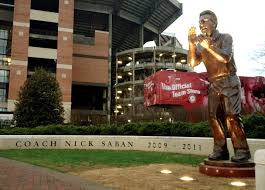 “Why don’t you stop living in the past?” I heard a voice say from somewhere, as Sister Rosetta Tharpe would put it, up above my head.

I turned and looked in the bare ruined choir of an elm tree’s branches and saw–a raven, very much like the raven who kept saying “Nevermore” to Poe.  What’s the old Winston Churchill gag?  A fanatic is someone who can’t change his mind and won’t change the subject.  I was tempted to give him the old raised-eyebrow “Excuse me?” but since he’d succeeded in enunciating a coherent, eight-word sentence instead of just “Nevermore,” I figured he might be worth talking to.

“What’s wrong with living in the past if the past is better?” I asked, laying emphasis on the last word just so he’d know where I was coming from. 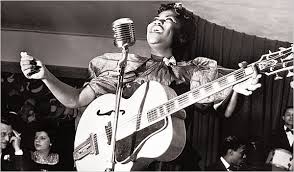 Sister Rosetta Tharpe, looking up above her head.

“It means you’re a romantic,” he said.

“Since when can ravens talk?” I asked, not quite ready to engage with a bird on the fields of rhetoric.

“If you would spend more time on cheezburger.com and less reading hidebound New England witch-burners like Cotton Mather you would know that Corvids . . .”

Statue of Edgar Allan Poe and a raven . . . coming out of his suitcase?

That put the matter in a whole new light.  “In that case, what’s wrong with being a romantic?  Poe was one.”

The raven scoffed.  “You’re comparing yourself to Poe?”

“Well, we both lived in Boston, and published poetry.”

“He’s done a good deal better than you,” quoth the raven.

“He was an unsuccessful newspaper writer.”

“I’ll grant you that one,” the raven said, recalling my undistinguished days as cub reporter on the Sedalia Democrat-Capital and the Worcester News-Recorder.  “Why do so many newspapers have hyphens?”

“I don’t know, maybe they think it makes them sound like British royalty.  Lastly, I’m not a big fan of the Transcendentalists and the genteel tradition of Boston writers–neither was Poe.”

“Didn’t you read The Song of Hiawatha in 8th grade English class?”

“With Miss Doretta Waite?  Sure I did.  Who could forget its stirring opening: ‘By the shores of Gitchee Gumee . . .'”

“Yeah, that’s a great line,” the raven said, waxing rhapsodic for a moment, a far-away look in his beady eyes.  “It’s the rest of the poem that’s utterly forgettable.”

The black bird hopped down from his perch and took a seat on a bench.  “Do you have any yogurt-covered raisins?” he asked half-apologetically.  My guess is he’s a little embarrassed to be classed with the general run of panhandlers you see in Boston.  Some are careerists, occupying the same high-revenue street corners for decades at a time while the world revolves slowly around them.  You have to figure somebody gave them a $5 bill somewhere along the way, maybe on their first few days on the job during the early 80s when Reagan was president, thinking he forced them into it, and they never looked back.  That’s the way Bostonians are:  a big heart often rules a teensy-tiny brain.

“As a matter of fact I do,” I said, as I pulled a cellophane bag out of my coat pocket and offered it to him.  “Knock yourself out.”

We sat there sharing the remains of the $3.29 “healthy” snack, gazing out over a scene not too different from what Poe could take in from the same spot two centuries before.  “If he hated Boston so much, why did he come back?” I asked.

“I think he learned to hate it after he came back,” the bird replied.

“So I probably shouldn’t move back into the city now that we’re empty-nesters?”

“I’m an empty-nester, too,” he said.  “It wouldn’t improve your writing any, that’s for sure.”

“I never could get anything written when I lived downtown,” I said, nodding my head to agree with him.  “Too many distractions.”

“It was only when I moved to the suburbs that I became productive.”

“To be stupid, selfish and have good health are three requirements for happiness, though if stupidity is lacking, all is lost?”

“No, ‘Be regular and orderly in your life, so that you may be violent and original in your work.'” 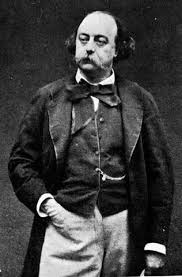 “I thought that was Richie Allen,” I said.

“Did you know he’s up for the Baseball Hall of Fame this year?” the bird asked.

“He fell one vote short,” I said, breaking the bad news to another fan of the man who said “I’ll play first base, third base–anywhere but Philadelphia.”

“Too bad.  Like Poe, he’s got the establishment against him.”

“Yeah, but Poe prevailed.  See that pond over there?” I asked, pointing to a big concrete oval on the Boston Common that’s set up for ice skating. 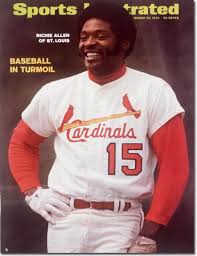 “On the nosey,” I said.  “‘Frog-Pondians’ was Poe’s term for Bostonians who thought art had to have a moral.”

“Did those people . . . reproduce?” the bird asked delicately, avoiding a word that would be Banned in Boston in case any descendant of the Watch and Ward Society was listening.

“Yes,” I said.  “Their descendants now write for The Boston Globe.”