In 1977, the creator of the world’s largest malted milk ball had it notarized.

I have to admit, many years after the fact, my mom was wrong.

“Get your notary license, it’s a good sideline,” she said.  “You’ll never be out of work.  There’s too many dishonest people in the world, you can’t trust anybody anymore.  That’s why notaries will never go out of style.”

Ha–fat chance.  Last time I proposed to my long-time, on and off girlfriend Cynthia DeMasio, she said no way.  “Not until you get a real job,” she said.  “Being a notary public you just have delusions of grandeur.”

But what delusions they are!  Maybe I can’t officiate at wedding ceremonies, like snooty justices of the peace, but taking acknowledgments on real estate documents?  Authenticating signatures on affidavits?  Notaries are still your best bet, and at $2 a signature, you can’t beat our everyday low prices!

What my mom had no way of foreseeing was the revolution in technology that now permits people to sign documents electronically!  No need for the face-to-face, “sit-down” closing.  Your mark–whether it’s a simple “X” or a roccoco “John Hancock” is good even though signed miles away.

At the same time, there has been a precipitious decline in notarial ethics; notaries who take acknowledgments over the phone with a wink that no one at the other end of the line can see.  Notaries who “witness” signatures they’ve never seen, but have merely heard about, depending on the so-called “hearsay” exception.  Talk about bending the rules to the breaking point!

I decide I might as well take a nap since the notary profession seems to be in such a deep depression, when my cellphone buzzes.  I look at the screen, see a number I don’t recognize, but decide to answer it any way.  In the immortal words of Roy Cohn, closeted gay Republican lawyer and assistant to Senator Joseph McCarthy, “Pick up the phone–it might be business.”

“Hullo,” I answer drearily.  How would you answer if your last notarial assignment was a retail installment sales contract–three months ago?

“Hello, I’m looking for a notary public–are you available?”

Thank God my phone is a cordless model, otherwise I might have choked myself lunging with excitement.  “Twenty-five hours a day, eight days a week!” I say breathlessly.  “What kind of job is it?”

“A record-breaking piece of candy.”

I review in my mind all the phone gags of my youth: Is your refrigerator running?  Do you have Sir Walter Raleigh in a can?  Nope–nothing registers.

“That’s okay–this is my only shot at getting in the Guiness Book of World Records.”

“Over at the Whoppers plant, in Canton.”

“I know it well.”  Only too well, as I have been known to ingest an entire Whoppers theatre-size box of the the flavorful treats before the previews are over at the Framingham 14 Megaplex, thereby bringing on a near-fatal case of the hiccups.  “I’ll be there in two shakes of a lamb’s tail.”

I grab Dulcie, my pet lamb, and put her in the front seat of my 2006 Pontiac Torrent.  “You can shake it once on the drive, but save the second one for when we pull in the driveway.”

“Bah,” she says.  “I was hoping to catch Antique Roadshow this afternoon.”  She’s so wooly-headed–she watches PBS all the time.

I head out to Route 128, America’s Technology Highway, then south to Canton, hoping to make it before this plum assignment gets scarfed up by somebody else in the high-powered stamp-eat-stamp world of notarization.  Because my notarial income has been flat for the past two decades, I don’t have access to GPS and must find my way by sight to the job, with Dulcie riding “shotgun” as she navigates.

“Would you hurry the fuck up?”

“You’re asking me?” she asks, rhetorically and incredulous.  “You couldn’t find your way out of a Barnes & Noble bag if there were instructions on the sales slip.”

“Okay, maybe I am a little introverted,” I say.

“Now a left,” Dulcie says, and I see what has to be the world’s largest malted milk ball, sitting in the driveway of a modest split-level.  Not my tastes, but . . .

“The guy’s waiting,” Dulcie snaps.  “You can’t sit there woolgathering with an interior monologue!”

I get out, grab my notary bag, and approach a man who is throwing sandbags around the base of the giant confection in the apparent hope of stabilizing it.

“Glad you could make it,” he says.  “All the other notaries were busy.”

“I need two witnesses, at least one of whom must be disinterested.”

“And believe me,” Dulcie says, “nobody could be less interested in your bloated malted milk ball than me.”

“Would you cut the palaver?” the man says.  “There could be malted milk ball makers in parts unknown who are gaining on me.”

“Fine,” I say, and ask him to raise his right hand.  “Do you solemnly swear that this giant malted milk ball is solely the product of your efforts?”

“That it was made entirely of fresh, natural ingredients like sugar, corn syrup, malted milk, whey . . .”

“Like Little Miss Muffet, who sat on a tuffet, eating her curds and whey?” Dulcie interjects.

“On the nosey,” I reply, and return to the grave and solemn act of authentication.  “Along with 2% or less of really weird-sounding stuff like tapioca dextrin, resinous glaze, sorbitan tristearate and soy lecithin.”

“Nothing in there I wouldn’t eat myself,” the man says.

“And is this your free act and deed?” I ask.

“What the hell’s that supposed to mean?” the man asks.

“That nobody’s making you do this,” Dulcie says.  “It’s part of the routine.”

“Freaking Mother-May-I . . . YES!” he nearly screams.  “I’m gonna be in the Guiness Book!”  The guy’s ecstatic, and as I look around at the pathetic life he’s living–aluminum siding on the house, cracking driveway, kid’s “Big Wheels” car in the yard–I can understand why.

“Hey–you want your place in history or not?”

The guy stops and thinks a moment.  “I got a better idea,” he says.

“What?” I ask.  You learn to be skeptical as a person whose job it is to take sworn statements that can literally mean the difference between recording a condominium smoke detector certificate–or not.

WASHINGTON, D.C.  District of Columbia Police had their hands full today as they removed demonstrators protesting a proposed oil pipeline from the White House only to see a crush of notary publics rush in to take their place. 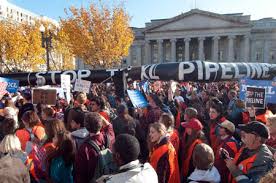 “Sign the Interstate Recognition of Notarizations Act of 2010, you fascist!” screamed Maury Chirette, a property insurance agent from Natick, Mass. who could formerly count on lucrative notary fees to supplement his income from commissions.  “Why are you hiding behind the phony crisis in Ukraine?” shouted Marla Blozonoviska, a second-generation Freedonian immigrant who brought her 90-year-old mother to protest along with her because she couldn’t afford in-home elder care after losing the steady stream of $2 per signature statutory charges. 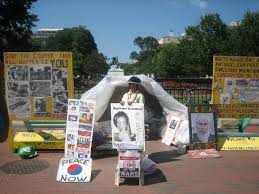 Notary publics provided the President with the margin of victory in 2008 as Arizona Senator John McCain spent precious campaign resources appealing to justices of the peace, who by law are authorized to impose fees that are often fifty times what notaries receive for comparable services.  “We saw McCain as the lapdog of the rich and high and mighty,” says Norbert Hostkins of Keokuk, Iowa.  “Turns out Obama only wanted us for our votes.”

The President vetoed the Interstate Recognition of Notarizations Act of 2010 out of concern that the bill could lead to illegal foreclosures.  “It’s absurd to think a notary would violate his oath for a lousy $2 acknowledgment fee,” said Vernon Lusgrave of Calumet, Indiana.  “I personally won’t commit fraud for anything less than fifty dollars.”

The veto has brought notaries together in a way that is heartwarming to older members of the guild, who recall the cut-throat competition that drove fees down below the poverty line during the mortgage boom of the 80s.  “Used to be we’d fight over everything,” says Howell Haskell of Lake Taneycomo, Mo.  “We had fisticuffs break out at the 2004 convention over whether it was ‘notary publics’ or ‘notaries public.'”  Asked which formulation he prefers, Haskell says “I’m not getting into that bowl of chili again.” 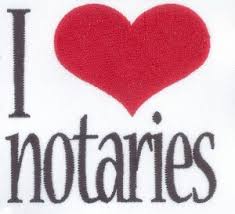 Police and protestors struck a tentative deal under which the notaries would be allowed to march at the White House as long as they kept moving and remained peaceful, but that left an opening some notaries said they could drive their seals through.  “I read the fine print,” says Lusgrave.  “It says nothing about stamping young ladies on the thigh with ‘My commission expires August 12, 2016.'”