WEST LAFAYETTE, Indiana.  Steven Burns is a professor at Purdue University’s medical school who specializes in sleep disorders; his wife Maria is an opera buff who often orchestrates trips to cities where she can hear her favorite tenors and sopranos.  “You marry the woman, you marry the hobby,” Dr. Burns says, a little bleary-eyed after a long night at the Cincinnatti Opera listening to Madame Butterfly. 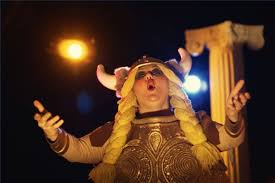 “Does this helmet make me look fat?”

Dr. Burns has recently found a side benefit to his nights at the opera that has brought him notoriety in his academic career, however.  “It struck me that some of the most peaceful hours of sleep I’ve ever experienced were at the opera,” he says.  “I tried that theory out on some of the patients in our longitudinal study of insomnia, and it has produced remarkable breakthroughs.” 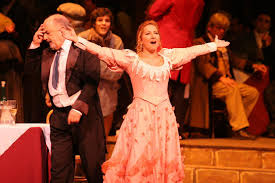 “It’s not that I find you bo-ring, it’s just that someone in the front row is sno-ring!”

Take the case of Kevin Nix, a sports nut who often stays up until the wee hours of the morning watching NBA games on the west coast, then has trouble falling asleep.  “It was amazing,” says Nix of the short-term treatment Dr. Burns prescribed for him.  “I slipped the disc to Rigoletto into my DVD player, and within ten minutes I was snoring so loud I woke my wife up.” 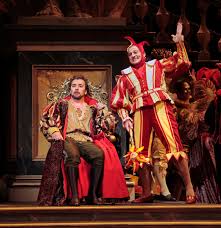 Sleep pathologists say their data reveals effects, but not the causes behind the soporific effects of opera.  “One theory–and it’s just a theory–is that so many costumes worn by opera singers look like pajamas that you are lulled into a relaxed state of mind,” Burns says.  He refuses to draw any conclusions until he and his colleagues have examined a larger sample of subjects, however.  “The study isn’t over,” he notes, “until the fat lady sings.”

BOSTON.  This city, which at one point could claim to be the Hub of the Universe and not provoke laughter, boasts a world-class symphony orchestra, art museum and ballet company, but can’t seem to get off the schneid when it comes to type of highbrow culture: opera.

“I don’t know what it is,” says Sam Resnoni, an auctioneer who formerly specialized in selling off restaurant fixtures.  “Opera just don’t do well here.”

And so Resnoni switched a few years ago to become the first–and still the only–full-time liquidator of opera props, costumes and sets in the country.  “It was gettin’ so everybody and his brother was into restaurant fixtures,” he says with a tone of relief in his voice.  “The competition was so fierce I had to move to Worcester and do railroad car diners to survive.”

All that changed in 1990 when Boston’s last major-league opera company gave up the ghost.  “You know they say the opera ain’t over ’til the fat lady sings?” Resnomi says as he adjusts a publicity photo of Sarah Caldwell on his wall.  “Well, she sung.”

After Resnomi made what he calls “a pretty penny” buying and re-selling elephants and spears from Verdi’s Aida and Viking helmets from Wagner’s Ring Cycle, he never looked back.  “Every couple a years some young”–he hesitates as he chooses le mot juste–“a-feeshee-a-nado will take a run at Boston, and no sooner has Mimi died of her coughing fit in La Boheme than I’m back in business selling her muff–which ain’t what you think it is.”

Culture mavens have often speculated as to why Boston is the graveyard of opera companies, with no one theory prevailing to date.  “The field is so crowded!” says Aimee van der Pol, an attache to the mayor who came up with the slogan “Culture so thick, you can hit it with a stick!” to promote the local arts scene.  “Maybe if the women would lose some weight.”