On his birthday, Herod gave a banquet for his court,
to which his wife Herodias was not invited.
There Salome, her daughter by Herod’s brother,
danced so boldly and so well that Herod said
he would grant whatever she wished. 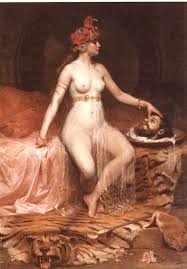 Salome left the hall and went to her mother
to ask what she should request, and her mother said
“Ask for the head of John the Baptist,” who had told
Herod that he should not marry his brother’s wife.
The daughter returned and said that she wanted 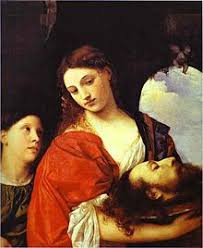 the head of John the Baptist on a platter,
adding the latter touch of finery, or propriety,
for reasons all her own, unknown.  Herod complied
with sorrow; he hadn’t meant to murder the man,
just to keep him in prison where he could not work his magic. 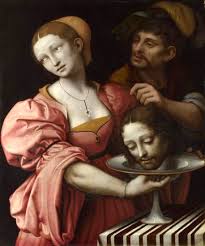 And so a soldier beheaded the Baptist.
Such is the power of the dance of young women
upon old men. What a king would not do for
his wife, he would do for her whirling
daughter by his own brother.

One thought on “The Dance of Salome”